Cooking with CBD because consumers want it

The U.S. Food and Drug Administration may have made it clear late last year that the use of cannabidiol, or CBD, is not allowed as a food additive, but the news hasn’t stopped chefs from mixing, whisking or drizzling the non-psychotropic derivative of the cannabis plant into food and beverages.

In 2018, the federal government legalized hemp, a form of cannabis from which CBD is produced, but the FDA is still evaluating CBD’s safety as a dietary supplement. Since then, however, various states have enacted a mish-mash of regulations permitting the sale and consumption of CBD under certain circumstances.

Among the restaurants using CBD in creative culinary applications is Monarch and the Milkweed, Chef Andrew LeStourgeon’s pastry shop, “finer diner” and cannabis confection retail brand based in Burlington, Vt.

In February, Monarch began making available to its guests the Milkweed’s retail menu of truffles, marshmallows, gum drops and candies laced with full-spectrum CBD, a variety that includes tetrahydrocannabinol, or THC, the psychoactive compound that delivers a high.

CBD can be added in to any smoothie (Hilo pictured here) at Shaka Bowl in Hoboken, NJ. 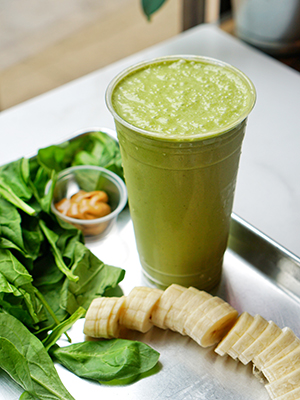 The most popular Milkweed treat is the Evergreen Bud, a dark chocolate truffle with a conifer and pine fondant center rolled in dark chocolate, which contains about 75 milligrams of CBD ($10 per piece). The French-trained LeStourgeon created the combination to complement the distinctive dank and weedy flavor and aroma of full-spectrum CBD.

“The CBD olive oil reinforces the richness of the dessert and adds slightly an earthy nutty and fruity end note which pairs well with the richness and creaminess of the pots de crème,” said Kryck.

In addition to CBD in desserts, Kryck also offers the PDX Vegan breakfast dish, a medley of seasonal sautéed vegetables topped with avocado, micro greens and drizzled with CBD olive oil, and as an add-on to the CraftPDX Burger Lab, in which the burger bun is toasted with the CBD olive oil.

Also adding CBD to sweets is Shouk, a modern-Israeli fast-casual concept with two locations in Washington, D.C. Shouk plans to add to its entirely plant-based menu a Choco-Cardamom cookie infused with full spectrum CBD. Each vegan cookie will be made with dark chocolate, coconut oil and cardamom and infused with between 50 milligrams and 100 milligrams of CBD.

“Shouk opened with a mission to make plant-based eating mainstream and promote overall wellness,” said chef and co-owner Dennis Friedman. “With that in mind, adding a CBD cookie was a no-brainer. We’ve been perfecting the recipe for a while now and it is finally ready to debut on the menu.”

Another health-centric concepts adding CBD to its menu is Shaka Bowl, a family-owned healthy lifestyle eatery with two locations in Hoboken, N.J. For $2, about .75 milliliters of full-spectrum CBD oil can be added into any one of the 10 plant-based smoothies.

“There is no one smoothie over the other ordered or preferred because it does not alter the taste dramatically,” said co-owner Krista Gormeley. “Since we are not cooking the CBD, it does not lose its potency.”

Shaka Bowl also offers 350-milligram bottle of the CBD for retail purchase, which Gormeley said sells out almost every time its restocked.

CBD, especially full spectrum, is most often found on menus in desserts and sweets because sugar and butter make it easier to mask its distinctive taste. Yet, some restaurateurs are exploring savory applications.

On the menu at Corn Dog with No Name, an elevated carnival food eatery in Dallas, is The CBD ($12), a traditional smoked pork and beef frank, battered in corn meal, deep fried and then injected tableside with 500 milligrams of broad spectrum CBD oil, which is like full spectrum CBD except without THC.

“There’s been a huge explosion of presence in Texas with stores selling CBD,” said owner Jace Fletcher. “There’s been so much momentum, so much interest that if they want it, then we have it.”

Using a 10-inch horse tranquilizer needle tableside to inject the oil is both fun and functional, as it evenly distributes CBD into every bite.

Fletcher doesn’t envision adding CBD to her funnel cakes or French fries anytime soon, but she is currently exploring adding to her menu CBD-infused kombuchas and other such beverages produced by local retailers.

Still, Fletcher says she is following CBD legislation closely, and is mindful not to make any health claims.

Other restaurants are taking a subtler approach to getting around the health department rules by selling retail CBD products that customers can choose to add to existing food and drink.

For example, Denver-based creamery Sherry’s Soda Shoppe, the newest concept from Bridge and Tunnel Restaurant Group, offers a Lavender Lemon CBD soda from Backyard Soda Co. Customers can enjoy the soda, which has 15 milligrams of full-spectrum CBD, on its own or incorporate it into a float.

With legislation varying from state to state and federal law still evolving, it remains unclear whether or not culinary applications of CBD will continue to grow on restaurant menus.

“I think CBD is probably in culinary programs now because it’s interesting and hot topic,” said Fleming. “That’s different than retail sales. I don’t know if CBD has the staying power for being on menus for the long-term.”

CORRECTION: This story has been updated to correct the timing of the introduction of Shouk’s CBD cookie.